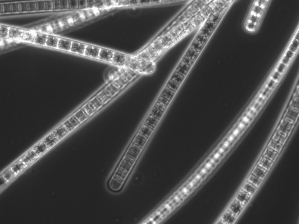 The Iroquois National Wildlife Refuge is home to four large wetlands and several natural springs. The springs are of particular interest because of the unusual nature of their geochemistry: described as “black water”, several of the springs are extremely acidic and rich in sulfide, ferric iron (Fe2+) and methane. Sulfide and ferric iron are rich sources of energy and electrons for chemolithoautotrophic microbes. The oxidized forms of sulfur and iron can actually inhibit methanogenesis - the biological process responsible for the generation of methane, a potent greenhouse gas. S, Fe, and C cycling in wetlands are a complex mix of biological and abiotic processes, likely made more complicated by local geology, seasonal changes, and the inputs of the springs. 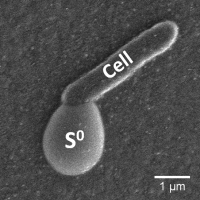 Chlorobaculum tepidum is a sulfur oxidizing bacterium that produces extracellular elemental sulfur (S0) globules via the oxidation of sulfide. When sulfide is depleted, C. tepidum will begin to degrade and oxidize S0 globules to sulfate. This metabolic practice makes C. tepidum a model organism to study the microbe-mineral interactions in both mineral production and degradation. And while microbes play a key role in sulfur cycling in the environment, little is known about the interactions between cells and solid S0. Thus, this work has especially important implications for the cycling of sulfur in the environment by way of inorganic sulfur intermediates.

Microbial metabolism can directly result in biomineralization or mineral dissolution – for example, many sulfur oxidizing bacteria can both produce and degrade elemental sulfur minerals. Microbes can also indirectly facilitate biomineralization or mineral dissolution, either through metabolic byproducts (e.g. organic acids), or simply by functioning as a surface for mineral nucleation. Thus, the role of microbes in the processes of biomineralization and weathering is both varied and widespread. Macroscopic evidence of such processes can be seen in the form of rock coatings (mineral accretions on rock surfaces), or weathering rinds (chemically-altered outer zone of a rock surface). Microbes have been implicated in facilitating the processes that produce both of these features.